This has been on my want list for my Luke Jedi collection for some time. This was put out by the French distributer, Meccano, and is a Luke Jedi figure on a Yan(Han) Solo cardback. I’ve seen a few of these over the years and most seem to also be packed with the palace blaster accessory while a smaller number are without. I’ve never seen one with the cloak/lightsaber included. I think a miscard like this is fun to break up a run of figures that to the average person look all the same. It’s also fun to see a different language on the text.

The real question is how did this combination happen. There’s enough of them out there, that it was deliberate and not just a one off accident. The majority of these type of miscards show up on Trilogo cards which replaced the Meccano cards later on. Did Meccano get a stock of Luke figures, but didn’t have the cards printed up for them yet? And why no accessories other than the palace blaster? Maybe because of Lukes popularity they were having trouble keeping up with demand and were just trying to get them out as quick as they could? It could also have been later on and they were simply trying to get rid of extra figures on extra cards. 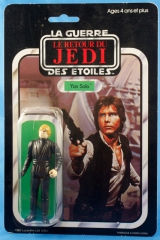 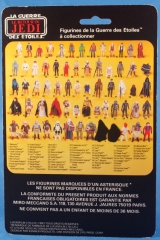