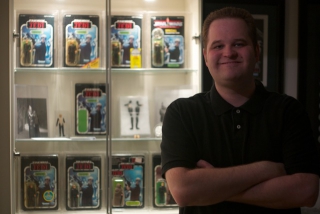 Welcome to powerofthetoys.com. This website is a showcase of my vintage Star Wars collection. Everything pictured on this site, except for the wants, are owned by me. I hope that you enjoy the site and have a look around. Please feel free to contact me for comments, suggests, or if you just want to discuss vintage Star Wars.

I figured it would be good to share a bit of my history with Star Wars and collecting. Being born in ’78, I mainly remember the very end of the Star Wars phenomenon. As such Return of the Jedi has always been a favorite of mine, even though it is usually regarded as the weakest of the original movies. However, my older brother, David, was the prime age for Star Wars toys when they were first released. As such, I was able to play with some of his toys once he outgrew them.

Here’s a few old picture of him and his original collection. 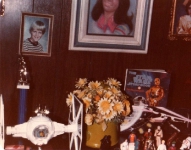 I remember playing with a few of these toys, mainly the Millennium Falcon, Snow speeder, and Tie Fighter.

Once the Return of the Jedi toys came along I was old enough to get my own. Luke Jedi has always been a favorite and even though I don’t remember the specifics in how I got that figure, I still have him to this day. Another item from that time period that I loved was the green “The Force” lightsaber. I also still have this even though it is worn having been in many battles. I vaguely to remember getting this at the Las Vegas Toys R Us which was always my favorite toy store as a kid. 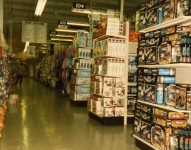 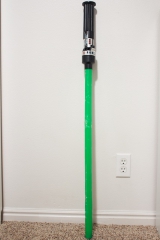 Here are both of those pieces and and old Toys R Us photo that someone was smart enough take back in the day.

After that brief introduction to Star Wars I moved onto the other toys of the time like Transformers, G.I. Joe, Voltron, etc. I continued to enjoy and watch the original movies from time to time, but never thought much about the toys.

In the early 90’s, I had some cousins, introduce me to Star Wars: The Roleplaying Game on a visit. I had so much fun that I decided to get the books and try to get my friends involved. Luckily, they seemed to have just as much fun and playing ignited that Star Wars spark within me. I started soaking up every little bit of Star Wars information that I could find at the time and started reading the then new Thrawn Trilogy of books that took place after the movies.

Some time after this, I went to look at the Role Playing books at our local bookstore and in the same section was a gold & black book with Darth Vader’s image on the cover. I thought that it looked interesting and started to flip through it. About halfway through I started to see pictures of the various Star Wars toys from the 80’s. It brought back some of those early childhood memories and at the same time I wanted to get a few of them as there were no toys available in the stores at this time. That book was: Star Wars: From Concept To Screen To Collectible written by Stephen J. Sansweet. I consider that moment as the point when I wanted to become a collector, but I had a new dilemma. Where would I find these old toys? 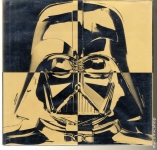 Now being into Star Wars and wanting toys, I found several Sci Fi and Toy related magazines. While flipping through the pages and skimming the articles, I noticed an ad for Star Wars figures. They had a combination of loose, bagged, and Mint on Card figures. Being still in my early teens and not having much disposable money I decided early on that I wanted to collect loose figures. I liked that fact that I could pose them how I wished and make up scenes. I started to find many other dealers, but a lot of them required sending a Self Addressed Stamped Envelope to get their lists. I sent out as many as I could find. Once I had all the lists I was ready to start placing orders. I began with mostly Return of the Jedi characters. They were generally cheaper and after all that was the one that meant the most to me.

Here is what my collection initially looked like after placing some of those first few orders.

I continued adding to my loose collection as I could. Also, in mid ’95 I found The Star Wars Collectors Archive on the internet which further fueled my interest and a collectors news group. I tried to soak up all the information I could on the archive and couldn’t believe all the things I saw including toy/packaging prototypes. I was glad that I could at least see some of these items as I never expected to own anything of that nature.

Here’s the one post I did on the newsgroup. I never really participated there, but did read every chance I could get.

By the early 2000’s I had completed my loose collection up to the first 79. I originally wanted to stop there as the cost of the Power of the Force figures was quite a bit more. However, the completist in me couldn’t stop and ebay had really driven the prices down a bit on loose examples.

Here’s what my collection looked like just shortly after I added my first Power of the Force figures. I was really happy the day I added that Luke Skywalker in Stormtrooper Disguise figure.

It wasn’t until 2007, that I got down to the last two figures I needed, Yakface and Blue Snaggletooth. I ended up buying my the Snaggletooth at Celebration IV which was my first Celebration event to attend. I thought it would be the perfect memento to remember the event. A few months after that I picked up Yakface on an ebay auction and the loose set was finally complete.

Here’s a collection picture around that time

After having that set finished, I wanted to make a display case for them all. I found some DIY type instructions and designed the case based off the later cardbacks which all the figures are shown with a yellow background. It was great to see all my figures lined up on the wall like that for the first time. 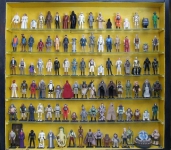 After completing a set of something the next question is, “Where do I go from here?” In taking so long to complete the loose figure set I certainly had my time to look at other ares of collecting and think about what was next. One area I toyed with was boxed vehicles and even bought some of those before I finished the loose set. However, I found they took up quite a bit of space, so I’ve tried to limit those down to just to my favorites. Instead, I decided to focus on the mail away premiums that were offered on the various packaging. This seemed like a no brainer actually as I loved participating in these as a kid for other toy lines/cereal promotions. The one thing I wanted to make sure was to get them with the actual mailing label on the boxes rather than the more common overstock boxes with no mailing label. I was able to assemble most of the set within a year minus the Early Bird mailer (because of cost), and the Young Jedi Knight mailer. I added both of those more recently. 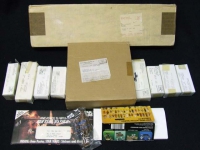 Another area that I began focusing on after the loose set was the Power of the Force coins. This was again a no brainer as I had a little coin collection as a kid, so what better way to add to my collection than with Star Wars coins. The only downside was that a lot of these coins have gone up in value, so I knew this would take me quite some time to assemble. I started casually in 2005 and just kept working my way up. It wasn’t until December of 2010 that I finished the basic coin set. And it is one of my favorite items in my collection. A big thanks to the dealers/collectors that let me do payment plans on them. That was certainly a big help.

The last area that I branched out with my collection was with a character focus. I mentioned before, that as a kid the Jedi Luke figure was my favorite. Up to 2007 I had my original figure, two loose variations, and my first carded figure. I knew being a main character that some stuff wouldn’t be as easy to find and preproduction items would probably be out, but it wouldn’t hurt to try. The collection has grown slowly, but steadily and I’ve gotten quite a few items that I’m really appreciative of. It wasn’t until early 2010 that I found a proof card for sale and I got it at a great price. It was my first 2D preproducction piece in my collection and was related to my favorite figure.

I’ve completed most of my collecting goals that I’ve had, so where do I go from here. Well one thing that is for sure is you could be collecting this stuff for a lifetime and still not have it all. I still have a few little pieces here and there that I need to fill, but right now my main goal is focusing on the Luke Jedi items. Those will keep me going forever as there is no definitive list and new things are still discovered all the time. One thing for sure is that a collection is never complete. Interests can change and refinements made, but that is all part of the evolution of the collector. 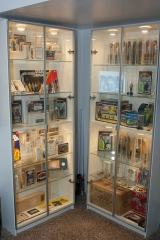