By 1984, interest in the Kenner Star Wars toy line was beginning to wane. Many of the children who grew up with the movies were getting to their teenage years, so they were no longer playing with toys. In an attempt to get the new generation of kids interested in Star Wars, Kenner devised a plan by giving out free toys. What kid could say no to that!

Kenner let their distributors know of the promotion via the Go For the Gold catalog which showcased a sample version of the mailer and also stated that Kids should start receiving them in June of ’84. 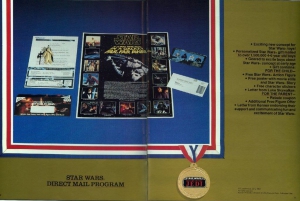 Quite a few of these sample kits made there way onto the collector market via a former Kenner employee. They can be distinguished by being addressed to John A. Sample and coming with a bagged Logray figure with Made in Mexico text on the bag. The majority also have paint marks on the inside of the bag from Lograys headdress as it appears they were bagged before the paint dried and at one time collectors thought these to be painted first shot figures.

The Kits that were actually mailed out will be addressed to an actual person. Chewbacca is the most accepted figure by collectors to have been included with the kits, but I’ve also heard of Lando, Darth Vader, C-3PO, and Luke Jedi. The last 3 do not seem to make a whole lot of sense where they were offered for free via the included sticker sheet, but with them being main characters they do seem like good choices. 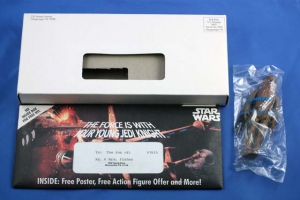 The contents of the kit included the mailer box, figure, envelope with letter to parents with detachable rebate coupon and 2nd free figure offer, letter to child from Luke Skywalker with stickers, so they could choose the 2nd free figure, prepaid envelope, and a poster. 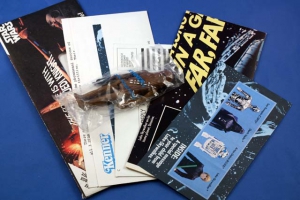 Until recently, it had been regarded that no one received the 2nd free figure in the promotion and no proof had existed. However, in 2008 I found an ebay auction that appeared to have some of the Young Jedi Knight paperwork and a few other pieces I hadn’t seen before. Luckily I won and anxiously awaited to see what I had found.

When I received the paperwork I found a letter from Kenner mentioning the 2nd free toy, another rebate coupon with similar graphics to those found in the first mailer, but definitely not part of the original mailer, and an R2-D2 cardback saying the figure had been received in August of ’84. The other interesting thing of note on the R2 cardback was that the proof of purchase had been blacked out with marker. Therefore, making it so the consumer couldn’t use it in another mail in promotion or on the included rebate. 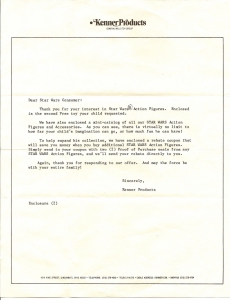 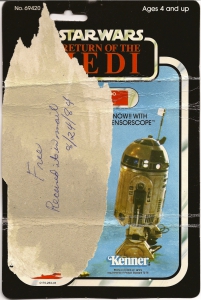 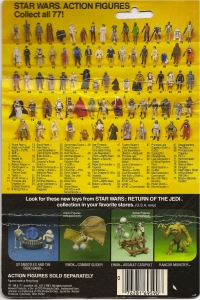 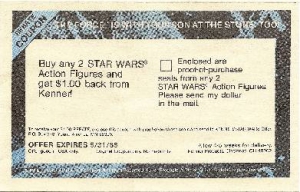 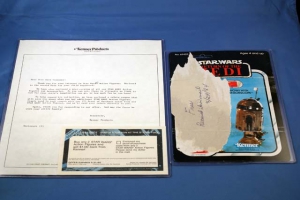 Up to this point I had figured the 2nd free figure would have been, like the first, in a Kenner bag, so this had me wondering if they were indeed shipped carded or at least some of them. I’ve casually kept an eye on auctions and over the course of 2 years have found at least one example of each figure on a cardback with the Proof of Purchase blacked out. A couple of these came from original owners and they said they believed to have received them in the mail, but could not remember the specifics. 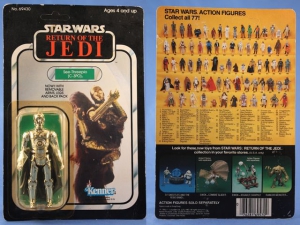 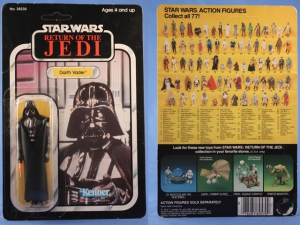 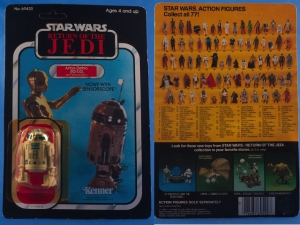 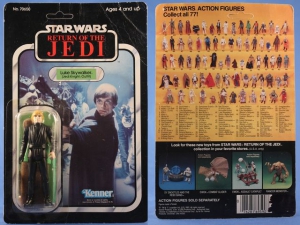 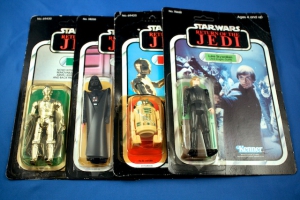 The last question I had about these, was “How were they mailed?”. Based on the packaging condition of these figures, I had the assumption that Kenner probably just stuffed them in an envelope, but I had no proof. Then, in June 2011, out of the blue an ebay auction showed up with the following picture. 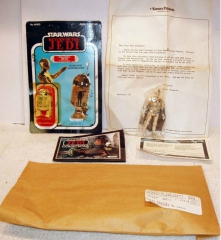 The auction included an envelope, followup paperwork, and a carded R2 with the proof of purchase blacked out. I finally had the answer I had been looking for.

Bonus: In my searching for these figures with the blacked out POPs, I’ve noticed one other, The Emperor. This did not make sense to me at first, as The Emperor is the most common mailer and a ton of overstock exists. Dealers have always had a ton of these sealed mailer boxes, so it was always my assumption that they made too many.

I believe I have found the answer to this mystery now as well. Recently, the Rebelscum photo archive updated their page on the Micro Collection Build Your Armies mail away. The thing of interest to me, was a note from Kenner Products again. Apparently, at one point, Kenner couldn’t keep up with demand for the Emperor figure and sent out the Micro Mailaways as a free gift for the extra wait time. I’d say it is possible that the time overlapped with when the Emperor was about to be available carded, so it is possible some mail away Emperor’s were sent out carded in order to help keep up with the demand. I’ve not seen an Emperor with an envelope yet, but I’ve seen enough with the blacked out POPs to support this theory. 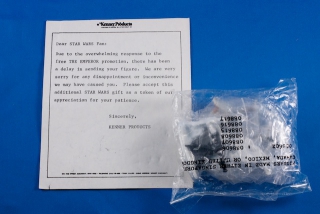 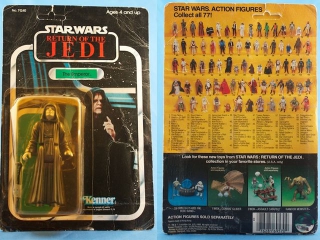