Here’s two new Luke additions that I was fortunate to add. The first has been on my want list for awhile which is a Australian Toltoys Luke Jedi with blue lightsaber. It features the offer for the Nien Nunb mail in offer and one interesting thing of note is that it still mentioned Revenge of the Jedi on the offer. These were later covered up with a sticker fixing the name change and then ever further on were printed with the correct title. 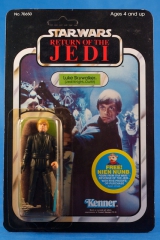 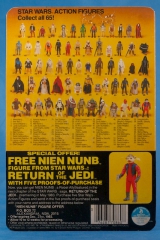 The next addition is a 65C Blue Saber Luke. The 65C card has the Emperor offer on the lower corner and this is the last U.S. card that you can find the blue saber Luke. 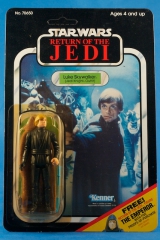 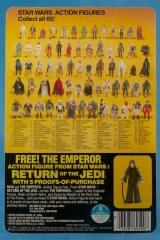 For those that aren’t collectors, but familiar with the movies, you might be wondering why they even made Luke’s lightsaber blue in the first place as it was green in the movie. Here is my theory that makes sense to me. In the early trailers with the Revenge of the Jedi title, some scenes actually show Luke with a blue lightsaber. Here’s a still from one of those early trailers.

It has been said that Industrial Light and Magic was having trouble with the blue for the scenes out in broad daylight, so the decision was made to switch the lightsaber to green. I think this was done very late into postproduction, so Kenner, who was working to get the toys ready in time for the movie release, actually had the blue sabers made up for the toys. Once the decision was made for green, they then moved production over to the new correct color. However, having already made up a bunch of the blue ones and possibly having them packaged at this time already. they just released them in both colors for a short while.