Another collector and I went in on some new cases for our Star Wars figures and I really like them. I was previously using these cases which worked well, but it wasn’t until after I bought quite a few that I found out about these cases. There are two things that I really like about the new cases. The first being that the depth is about half of the original cases, so they don’t take up as much space in that way. This does make them so they do not fit the larger figures, but they can be custom ordered to fit. In my case all my carded figures are Luke Jedi Knight figures, so they fit just fine. The 2nd think I like is the cases are wider which sets the figure out more that the previous ones. I think it helps make each figure look that more special. 🙂

The cases mimic those of the AFA Grading Company but where I don’t feel the need to have my figures graded and just want the nice cases, they work great.

The cases can be ordered from http://www.oscarscases.com and I highly recommend him.

Here are some pictures of two of my Lukes with a few different shots of the cases. 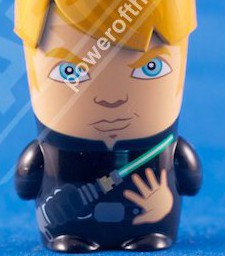