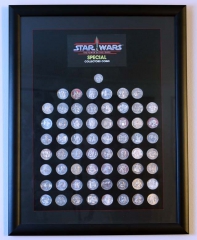 By 1985, interest in Star Wars was waning among children, as the movies were finished for the foreseeable future. To try and renew interest in the toys, Kenner, decided to include a coin premium as a mail away first and then shortly after packaged with the figures. Only about half of the silver coins made it packaged with figures before the toy line was cancelled and few participated in the mail away making some of these coins pretty tough to find.

There were also gold and bronze coins produced, for figures that went along with a Droids and Ewoks cartoon series, that didn’t last very long. A 2nd series of figures were planned for these, as well as coins to go with them, but they were never released to the public.

These coins can become highly addictive. I originally started by only wanting the Category 1 and 2 coins which are fairly affordable. Then saw that there really weren’t that many Category 3 coins and worked on those. Then I found myself wanting to “collect them all” :).

The coins are split into the category system that was created by Gus Lopez. Here is the link to his excellent guide that I highly suggest checking out.
The Comprehensive Guide to POTF, Droids, and Ewoks Coins